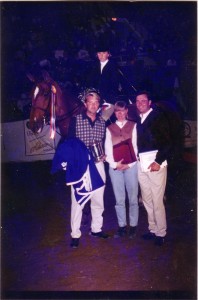 Meredith Taylor has been involved in riding and showing since she was a toddler. She rode in her first show at 21 months, and as a junior rider showed in everything from Short Stirrup, through all sized Pony Hunters to Equitation, Junior Hunters and Junior Jumpers.

During those years, she trained with Mike Henaghan, Gary Zook, Ken Berkley, and Missy Clark. Her major accomplishments included: CHRONICLE OF THE HORSE - AMERICAN HORSES IN SPORT ISSUE, 1995 (Click on Picture for full Aritcle)

Meredith stepped right into a professional career and was partners with Gary Zook in Millennium until 2001. From there she and husband Matt Amoroso opened Meredith Taylor, Inc., originally in MA and FL. As a professional, Meredith has had over 50 grand prix placings on National and International level including having been in the top 30 computer-ranking list. She has trained and ridden champions in the hunters and jumpers on both local and national levels. As a trainer, she has taken juniors to National Equitation Finals.

Meredith was more recently head trainer and coach at the Andrews Osborne Academy in Willoughby, Ohio, where she took the IEA team to National Finals

After AOA closed their doors in 2014, Meredith relocated with her husband, Matt and daughter, Avery, back to her roots in NJ.